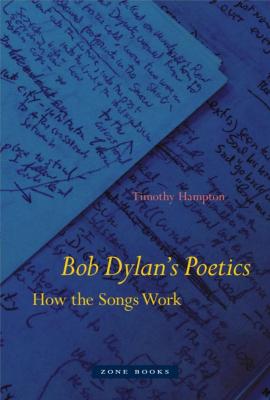 Bob Dylan: How the Songs Work

“With a style that turns analysis into a form of suspense, Timothy Hampton can walk you through ‘Visions of Johanna’ or ‘Summer Days’ the way the art historian T. J. Clark can walk you through Manet’s Olympia. There’s the same generosity of spirit, the same love for the work and the social meanings it absorbs, transforms, and sends back.  You really do begin to get a sense of how the songs work--Bob Dylan's songs, but anyone's songs, too--how they are assembled or assemble themselves.   And just when you think you've learned the language, Hampton will throw a curve.”

--Greil Marcus, author of Under the Red White and Blue: Patriotism, Disenchantment and the Stubborn Myth of the Great Gatsby

“This is an essential Dylan book and unlike any other. Hampton left me with a deeper appreciation of Dylan’s uniqueness as both songwriter and singer; his methods, his lyrical and poetic brilliance, his many voices.”  — Dean Wareham, musician (Galaxie 500, Luna) and author of Black Postcards

“Indispensable.... Setting some gold standard for what Dylan-based works can do, Bob Dylan's Poetics goes chord by chord and line by line, showing 'how the songs work' in form and are changed through performance.”

“Hampton's well-written book is the first one I would recommend to someone fascinated and mystified by Dylan's half a century of ranging among the things that songs can articulate."

"[This book] will become a standard account, destined to appear in class lists under 'required reading' it contains the searching close readings of songs that will both enable future study and require contestation for an alternative account:  the study sets a gold standard." --Nigel Smith, William and Annie S. Paton Foundation Professor of Ancient and Modern Literature, Princeton University

“As much fun as I've had with a book this year. You needn't be a scholar to appreciate Hampton's clear-eyed analysis of how Bob Dylan does what he does and why it's different from what a lot of people think that he does. Hampton considers a large swath of Dylan's catalog, providing thrilling (yes, thrilling) readings on a number of songs, from ‘Talkin' New York’ (the first Dylan song officially released on vinyl) to his 2016 Frank Sinatra covers.”

“A remarkable book, and more than worthwhile to those interested in song, lyricism, literature and creative invention.”